Don was recently interviewed out at Beware Reef by the ABC, after recording the 100th species of fish in the area.
By Reef Life Survey
June 16, 2016
Share this post to:

National Volunteer Week was in May.  As a volunteer-based organization, RLS recognizes the incredible work done by motivated people.  RLS volunteers bring a diversity of skills and backgrounds, yet share an interest in marine biodiversity and conservation.  We caught up with Don Love, one of our initial volunteers, to hear how and why he became involved in RLS.

RLS – When did you begin diving with RLS?

DTL – I first began diving with RLS at Flinders Island in 28 January 2008 on their first intake of prospective volunteers. What a daunting task that proved to be!

RLS – How did you hear about RLS and what made you interested in joining?

DTL – We were sponsored by Parks Victoria who organised for John Ariens, Mike Irvine (Parks Ranger) and myself to travel to Flinders Island to learn the finer art of surveying marine life in our temperate waters. Our interest was awakened because we had just surveyed the three wrecks on Beware Reef, and decided that to follow up we would catalogue all the marine life we came across and photograph as much as we could. Of course at this stage being ex-hunter gatherers, our knowledge of marine species was severely restricted to crayfish, trumpeter, sweep, leatherjackets, yellowtail kingfish and other well known ‘targeted’ species.

RLS – What is your professional and recreational background?

DTL – My professional background was in the teaching profession: 36 years at the ‘coalface’, 20 years of which I was a headmaster/ principal as well as full time teaching load. My recreational background has always been involved with the sea. It began in 1957, when my parents bought a block of land at Pt Lonsdale to build a holiday house on. There I learnt to dive around 1960, when I used to snorkel for flathead and flounder. I spent many hours beach-combing, rock pool rambling and fishing with a drum-net off Pt Lonsdale pier. In my teens, I spent many hours yachting, eventually doing a number of races across Bass Strait, diving along the way. 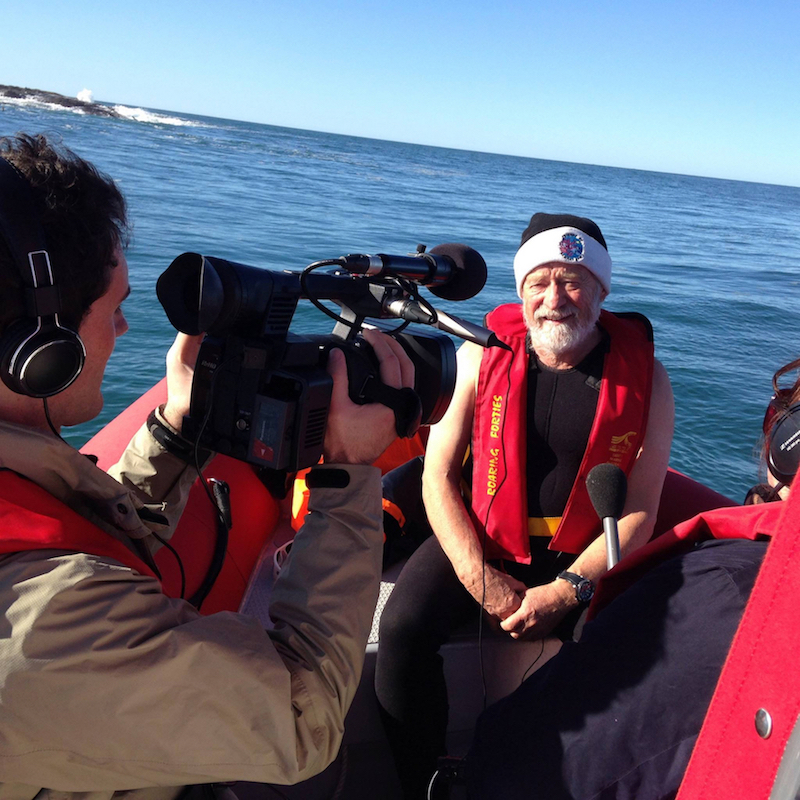 RLS – How long have you been diving / how many dives do you have?

DTL – I have been diving for 56 years, most of it on air. I am now on my third hooka unit, and fifth scuba tank, sixth underwater camera, at least 20 wetsuit combinations, surprisingly not many sets of flippers or diving knives. Lost my 23-foot Shark Catamaran when wrecked at Gabo Island, under suspicious circumstances. To date I am heading towards 6,000 dives but the exact number is unknown.

RLS – What is your favourite dive site?

DTL – I suppose my favourite dive site would be Port Phillip Heads, because that is where I really learnt to dive.  I still love to go back and dive many of my old haunts.

RLS – If you could be any species of fish, which would you be?

DTL – I don’t know what species of fish I would rather be. Probably not a snapper, kingfish or trevally as Rick would be trying to catch me all the time!  Being a Great White would be a buzz scaring people.

RLS – If you could dive anywhere in the world, where would you go?

DTL – The Outer Reef at Point Lonsdale at the end of a flood tide with 20+ metre visibility.

RLS – Describe your most memorable survey or species you’ve ID.

DTL – The most memorable survey could be one of many, but I suppose getting 45 species of fish on one 50m survey at Beware Reef a number of years ago was something special.

RLS – What advice / wisdom would you give to others wanting to contribute to marine conservation?

DTL – Get involved. Don’t say ‘I should have”,  just roll up your sleeves and have a go. In this conservation game the more people that put their hands up, the better the outcomes.

Many thanks to Don for taking time out from diving to answer our questions, and even more so for his massive and ongoing dedication to RLS and marine education.