Last year Derek "Dusty" Shields received the prestigious Scoresby Shepherd award for outstanding contributions to the Reef Life Survey program. Learn all about this outstanding RLS contributor.
By
April 07, 2017
Share this post to:

Last year Derek “Dusty” Shields received the prestigious Scoresby Shepherd award for outstanding voluntary contributions to the Reef Life Survey program (The Distinguished Contributions award; while his son Joe was also recognised for contributions to the RLS survey tally in the ‘Survey Prize’ award). Dusty and his son Joe have both contributed significant hard work, expertise and enthusiasm to the program. We thought we’d catch up with Dusty…

Tell us a bit about yourself:

I’m a marine biologist who did Honours with Gedgar at the University of Tasmania in 1976 and have been mates and then business partners with him since. I am also a sailor with 40 years’ experience, on and off, of ocean sailing. Now my kids have left home I have time to contribute to RLS and am enjoying doing so.

When did you join RLS, how did you hear about it, and why were you keen to join?

I knew about Gedgar’s method and “Reef Census” theory ever since Gedgar started working on it and helped on one or two of his earlier surveys. For years he has been hinting I should get more involved but I was busy running Aquenal and raising a family. Finally I had no excuse so here I am.

How much time have you spent skippering Reef Dragon/Eviota?

I started to prepare Reef Dragon for a voyage to Indonesia in December 2014 and worked through to April 2015 to complete the many jobs. Then we sailed for Port Macquarie on the first leg of that voyage. I handed her over to her previous skipper on the 15th April and a few days later she was wrecked. So I set out to find a replacement and by the 15th May had found and Gedgar had bought Eviota. On 24th May we set off from Pittwater to continue the voyage to Darwin, Ambon and back to Airlie Beach by 13th March. Gedgar and I did pretty much half time each during the voyage. Joe and I then spent a month preparing Eviota for charter. On the last voyage I spent a bit more than half the time from 1st November to 5th April on board. So the roughly equates to 3 plus 6.5 plus 2.5 equals 12 months of the past 28.

How long did your son join you for on Eviota?

Joe joined Eviota on her first voyage on 24th May 2015 and worked on her for all but about one month of the next 11 including a mammoth effort preparing her for charter. His highest fish species count was 127 species at Surprise Reef. He was a huge support in his role as first mate to Gedgar and me throughout the voyage. I missed him on the second voyage. 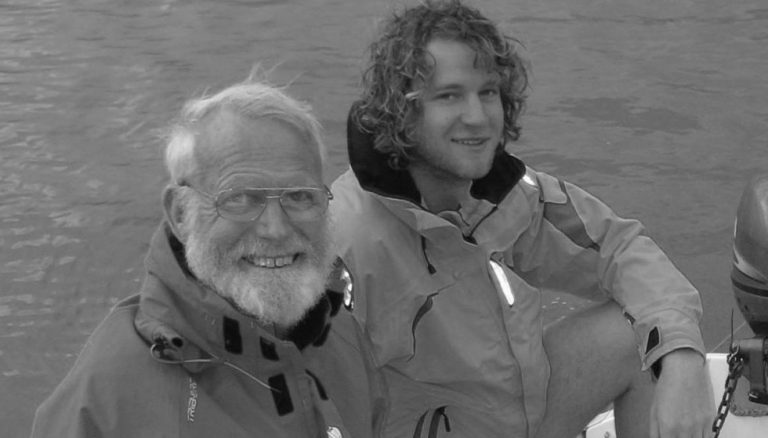 Which was your most memorable survey dive/trip/moment (and why)?

Dive; OMG Bommie in the Holmes Reefs this voyage. A pleasure dive with massive gorgonians and soft corals in a large swim through cavern. Trip; The leg from Thursday Island to Darwin where Joe and I sailed for days under spinnaker in gentle breezes beneath blue skies across calm seas, or the leg across the Banda Sea where we saw Blue Whales silently surfacing, resting and sounding in the calm waters of the early mornings. Moment; When Eviota cleared the gap in Lihou Reefs after cyclone Debbie made up her mind to move and I knew the boat and her crew were safe.

– Thanks Dusty (and Joe) – your contributions are genuinely appreciated. Oh, and love the hat!