In April 2021, a crew of five Western Australian RLS divers chartered a 30 year old cray boat, packed their swags and dehydrated meals, and set sail for the Houtman Abrolhos Islands, 60km offshore of Geralton, for 5 days of RLS surveys and countless parrotfish encounters.
By Paul Day
June 07, 2021
Share this post to:

We were on the brink of a five-day liveaboard survey trip to the Abrolhos Islands in March 2020 when the Covid-19 pandemic stopped the world in its tracks. On April 11th 2021, just five days before our second attempt to re-survey our Abrolhos Islands sites, cyclone Seroja crossed the coast at Kalbarri just 120 km NNE of the Abrolhos Islands Easter Group. Kalbarri was hit hard with around 70% of buildings damaged or destroyed by 170 km/h wind. Critical infrastructure was knocked out and businesses lost, a terrible blow to the community after such a challenging year already.

After numerous phone calls, emails and weather forecast watching, our skipper Gus Shields gave us the thumbs up to push ahead. Although the forecast was uncharacteristically “all over the place”, we felt confident we could achieve what we needed to, albeit in less than idyllic conditions.

The team gathered at the fisherman’s wharf in Geraldton at 5am on the 16th to meet Gus, his deckhand “Jacko” and to get acquainted with the Bagheera, a 60 ft Aluminium plate twin screw cray boat built in 1989. The Bagheera has been in the Shield family since new and has served as a cray fishing vessel the entire time based at Rat Island with more recent occasional use as a fishing charter, we were the first clients chartering the vessel for diving.

Equipped with the RLS air compressor, 14 tanks, swags, more dried food than an expedition to Everest and spare everything we steamed out of Geraldton before sunrise to begin the five-day adventure.

The goal was to re-survey ten sites established in 2008 (and subsequently repeated in 2013) and to then pick off as many sites as practical that were surveyed once before (in either 2013 or 2018) all dependant, of course, on the conditions. The Bagheera. Photo by Kevin Smith.

The team got off to a flying start, surveying three priority sites within the Easter group on the first day after a comfortable crossing in a 15-knot tailwind (even Gus commented that the crossing was the best in while). We quickly decided that using the jetty at the Shields property on Big Rat Island as a base was the best option considering the weather forecast. We also had access to the impressive 6m, 140hp Barcrusher that would serve as our tender. Data entry was a cosy affair around a table in the wheelhouse, in the bunks or propped up on the skipper’s chair (our outdoor table was unfortunately exposed to the 20-knot wind that puffed most evenings and reached 30 knots on one night). After data entry, we spread out on deck in swags and a camp bed to admire the endless stars and the magnificent Milky Way.

On day two at first light, we steamed an hour and a half north with tender in tow to the Wallabi group with a slight crosswind making for a rolly trip. The goal was to dive three sites, two relatively exposed to the wind and one tucked inside a lagoon behind Long Island, a perfect, well-protected anchorage. We were rewarded by recording a relatively high diversity of parrot fish across three sites (seven species including Hipposcarus longiceps (Longnose parrotfish), Chlorurus microrhinos (Steephead parrotfish), Chlorurus sordidus (Daisy parrotfish), Scarus frenatus (Bridled parrotfish), Scarus ghobban (Blue-barred Orange parrotfish), Scarus psittacus (Palenose parrotfish) and Scarus schlegeli (Schlegels parrotfish)), cute juvenile Threespot Dacyllus (Dascyllus trimaculatus) along with adults, Keyhole angelfish (Centropyge tibicen), Little Maori wrasse (Oxycheilinus bimaculatus) and Blue-stripe flasher (Cirrhilabrus temminckii) amongst others.

Making the most of the weather, we decided to steam south to the Pelsaert group on day three to target another three sites. One of our sites in this group is a mixture of stunning red algae, kelp and Acropora corals supporting a warm temperate/tropical fish and invertebrate community. Some of our records from this group include Gladius Drummer (Kyphosus gladius), Coral Trout (Plectropomus leopardus), Bridled parrotfish (Scarus frenatus), long-spine urchins (Centrostephanus tenuispinus), and abundant and highly active Western Buffalo Bream (Kyphosus cornelii).

Day four was windy with 30 knots and a 2 m swell restricting us to picking off sites within the Easter group using the very robust Barcrusher that chewed up and spat out the wind chop! (one of the fenders also made a great pillow whilst in transit!) 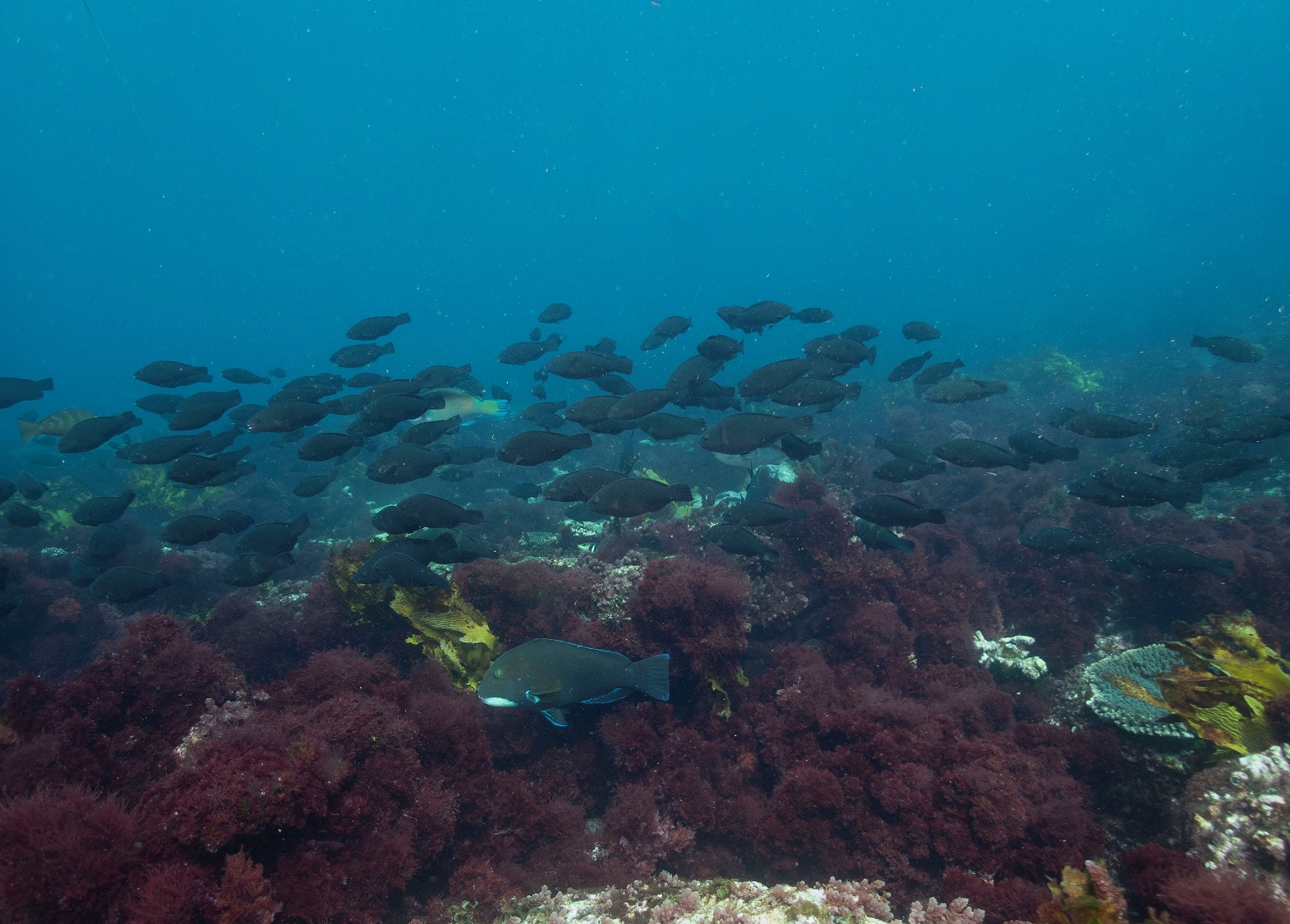 Our trip back to the mainland on day five gave us the opportunity to pass through the Pelsaert group and dive two more sites, one at the southern end of Pelsaert Island at a beautiful anchorage.

This trip was hard work with early starts and living basic on a cray boat, but the entire team rose to the challenge and worked like a well-oiled machine completing 14 sites, 28 transects recording 113 species of fish on method 1, 32 species of invertebrates and 23 species of cryptic fish on method 2.

Thanks to RLS divers Kevin Smith, Alicia Sutton, Nestor Bosch and Paul Day. Our skipper Gus Shields, and deckhand Jackson from Big Rat Fishing deserve a special thanks for being dynamic and supportive whilst providing their expert local knowledge and good music to work to.