It was our biggest RLS trip to Jervis Bay yet but with a forecast of 20 kn winds and 2m swell... it looked like it was going to be a disaster of a weekend. First dive to kick off the weekend... the water was a beautiful 23 degrees and 15-20 m viz! We laughed through our regs in relief and no measure of wonder at how fantastic the conditions were. John Turnbull wrote about their incredibly successful weekend full of surveys and training at Jervis Bay, NSW.
By John Turnbull
March 01, 2022
Share this post to:

I stood looking at what had previously been our regular boat ramp in previous years. This year, it was all construction barriers, diggers, and mud. Murray’s boat ramp was clearly out, and the weather forecast was swinging from south to north over the next four days with 20 kn winds and 2 m swell… should we have cancelled? But it was to be our biggest JB trip yet, with 2 boats, 11 RLSers and 2 trainees, so in for a penny…

Brian, our unflappable boat driver from SCUDA assured us we could get some good dives in, but the locals weren’t so sure. So it was with some trepidation that we made plans for the first day on the water. Brian would launch from Woollamia in the west of the bay and pick us up from the beach at Bristol Point, and we would drive over and attempt the sites on the inside of Bowen Island. We would meet Bruce in his boat, which would also launch from Woollamia and be filled with an enthusiastic group of locals who had just been certified in Sydney.

We discussed sites whilst the two boats drew alongside at Bowen, geared up and hit the water. What a shock! It had been 14 degrees in the water in Sydney the week before, and what did we have in JB? 23 degrees and 15 m viz! We laughed through our regs in relief and no measure of wonder at how fantastic the conditions were. Of course, on the surface, Brian and Bruce were getting blown like windsocks, but we were cosy below.

This was to set the tone for the next four days. By taking great care in site selection each day, based on the forecast and the knowledge of locals, we managed to get both boats lined up for sites first on the east of the bay, then the south, then north. Day 4 was the icing on the cake - my favourites sites inside Point Perpendicular in the northeast. Steep, sometimes vertical walls, overhangs and 20 m viz made these some of the best dives I’ve ever had in JB. A great thrill on the trip was seeing the other RLSers, some of whom were on their first RLS trip despite having dived these waters for several years, climbing up the boat ladder each time filled with excitement at the species they had seen and recorded. An RLS dive really does take a “regular” dive site to a new level. By forcing yourself to focus on every species you can find in just 50 m of transect, you often see much more, and the richness of experience is raised by being able to put a name to nearly everything. Then there’s that one shell, or fish that swims through transect, that you haven’t seen before and can’t ID. Back home that night, getting the ID books and web pages out to figure out what you saw, you can re-live the dive.

We ended up surveying 15 sites, completing 48 surveys and certifying two new RLSers in the process – Bruce and Nyrie, congratulations! Huge thanks to the RLSers from Sydney – Kris, Lou, Martin and Josh B; the local RLS team comprising Sue, Nathan, Naomi, Reilly, Lachie and Sabrina; and Maddie who flew down from up north. Special thanks to Josh B for organising much of the logistics, our boat drivers Brian and Bruce (of course Bruce drove the boat and got certified!), boat sitters and tank fillers Sue and the crew from Dive Jervis Bay. 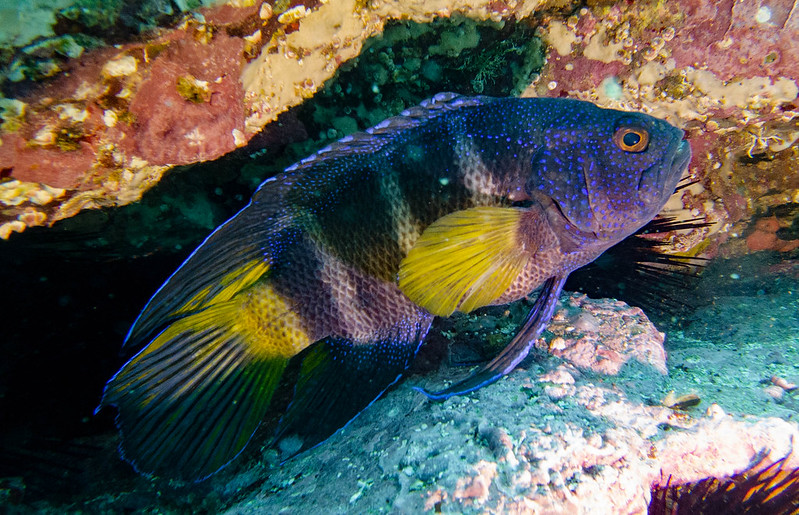 One of two blue devils on day 4. Photo: John Turnbull

So, what did we find?

Most common species: (based on % of transects on which they appear)

First sightings for RLS in JB:

The shell Fractolatirus normalis (we think!) spotted by Naomi