The first of hopefully many trips to come from our PhD’s, Tyson Jones, Ella Clausius, and myself, along with co-founder Rick Stuart-Smith, set out to re-survey sites around Albany, in south-western Australia, which haven’t been surveyed in nearly a decade!
By Olivia Johnson
May 16, 2022
Share this post to:

To all our delight, the first site that we jumped in to survey, Seal Cove, had almost 30m visibility and the beautiful sunny day made the dive and underwater atmosphere even more impressive. Large schools of Silver Drummer (Kyphosus sydneyanus), Western Australian Salmon (Arripis truttaceus) and Rough Bullseye (Pempheris klunzingeri) and Black-headed Pullers (Chromis klunzingeri) surrounded us along the transects and stood out amongst the golden kelp (Ecklonia radiata) dominated reefs. Maori Wrasse (Opthalmolepis lineolatus), Western King Wrasse (Coris auricularis) and McCullochs Scalyfin (Parma mccullochi) were some of the most common fish recorded on each of the surveys. 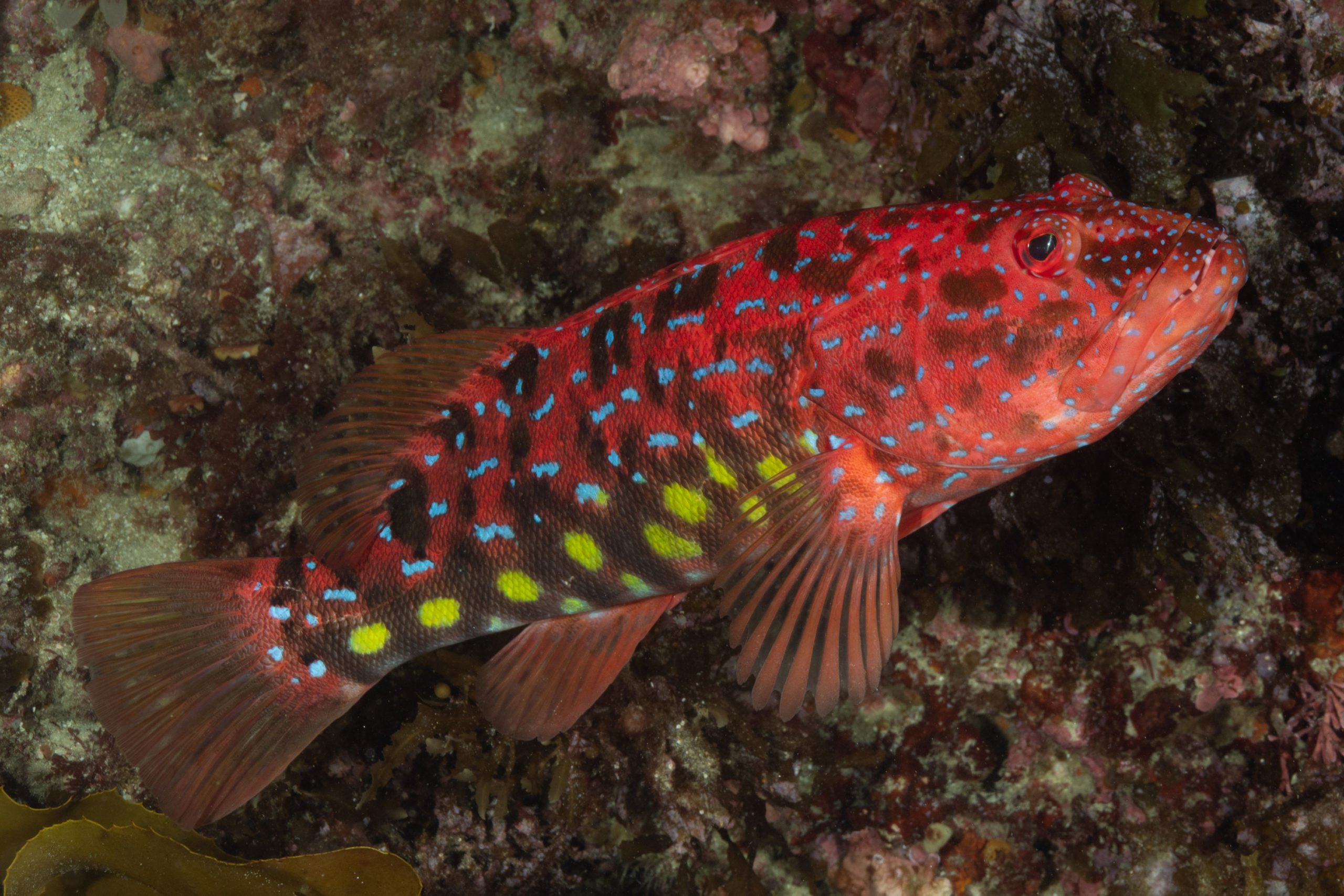 Species of interest for the group, particularly those of us that had never surveyed temperate reefs in Western Australia before, included the Western Blue Devil (Paraplesiops meleagris), White-barred Boxfish (Anoplocapros lenticularis), Sharp-nosed Weed Whiting (Siphonognathus caninis), Queen Snapper (Nemadactylus valenciennesi), Western Blue Groper (Achoerodus gouldii), the Red-lipped Morwong (Cheilodactylus rubrolabiatus), a very shy Silver Spot (Chironemus maculosus), the enormous Turban Shell (Turbo jourdani) and the Western Australian Chromodorid (Chromodoris westraliensis). Along with all these species, the multitude of sea star species and variation in their colours had us all referring to the ID books and expert opinions!

All sites varied from one another and over 5 – 15m. There was a real mix of lush brown algal beds, to sparce almost barren sites. There was also a wonderful mix of algae, coral and sponges over the reefs. Rick was determined to spot the elusive Braun’s Wrasse (Pictilabrus brauni) at the only site this species had previously been sighted before, but after a lot of searching, he settled for some stunning photos of the False Senator Wrasse (Pictilabrus viridis). 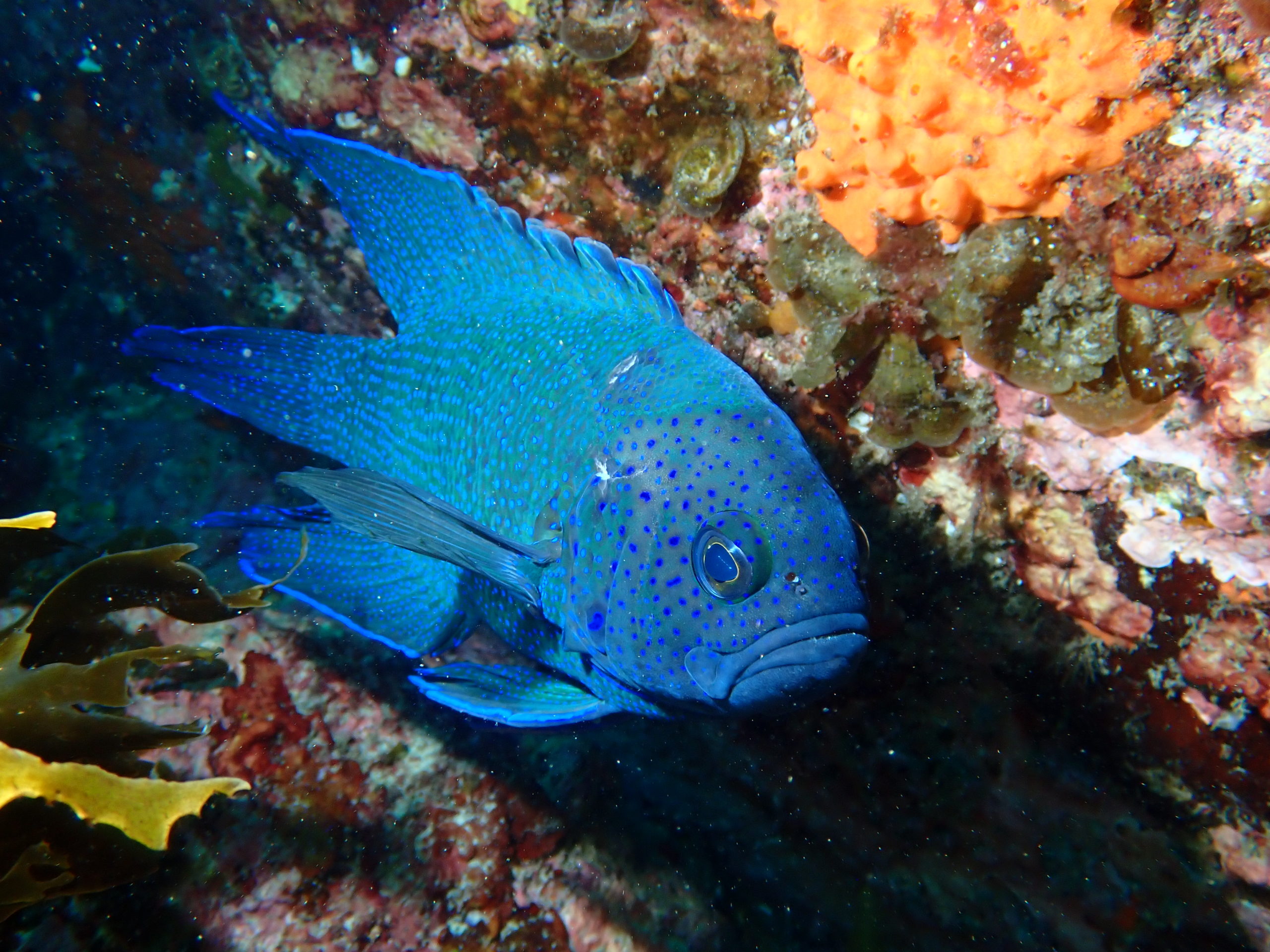 My favourite sites included Seal Cove, Michaelmas Reef North and Breaksea Cove – we also surveyed Cheynes Reef, Seal Island, Mistaken Island East, Julius Rock and Possession Point. Over three days of surveys, and some weather that wasn’t as promising as we were hoping for, 8 sites and 22 surveys were successfully conducted. These surveys wouldn’t have been possible without our amazing skipper Garry, owner of South Coast Diving Supplies, who provided us with some of the best diving service, including the best array of treats waiting for us once back onboard Goanna II.

A big thank you to the Ecological Society of Australia for the Holsworth Wildlife Research Endowment I was fortunate enough to receive to help conduct these surveys for my PhD research, as well as the Reef Life Survey Foundation.