The plan was to head towards PNG, to the Murray Islands near the northern limit of the Great Barrier Reef (GBR), sampling some of the comparatively protected reefs fringing various islands on the way; then weather permitting, spend time at two atolls outside the GBR (Ashmore and Boot Reefs); and finally visit parts of the GBR on the way back to TI. Kate Tinson replaced Carly in the crew for this leg.

Travelling north inside the GBR, it became obvious how shallow much of the Straits is. With maximum depths of 15 to 20m for miles and miles, the idea of a land bridge between PNG and Australia not so long ago geologically became a reality. The downside is strong tidal flows, and unfortunately (although every shade of blue), much reduced water clarity.

And the mobile coverage throughout was astonishing – yes folks, you can update your status on Facey as you sashay through much of the Straits!

The Straits are a natural divide between different continental marine faunas, and true to form, the four sites we surveyed in these shallow waters showed a continuing presence of most of our north-western Australian continental species (e.g. Stegastes obreptus), with the occasional eastern Australian species (like Chelmon rostratus) popping up. These were isolated sites, so the reefs were interesting despite the gloom, although lacking the very large numbers of predators characteristic of the southern Gulf shoals. A break in the relentless SE tradewinds beckoned, so we decided to curtail the fringing reef surveys and head outside the protection of the GBR to Boot Reef via Ashmore. What a change, with depths plummeting to un-divable, and water the clarity you see in the dive mag pics! And enough new fish species to do your head in, with an immediate doubling of numbers to 90-120 per transect for all the surveys on these outer atolls. There was no safe anchorage at Boot Reef, so the survey sample there was limited to two sites per pair of divers at Boot Rock (an isolated pinnacle) and two more at Boot Reef proper, with Eviota drifting at night, in the calm to glassy conditions. These dives provided as much adventure as you could wish for, with plenty of interest from grey reef sharks and the occasional oceanic white tip to add sauce to the surveys. For me, the highlights were a spawning aggregation of giant trevally (normally only seen occasionally as isolated individuals), and the astonishing numbers of several large surgeon species, such as the bizarre Naso tonganus and Naso annulatus (the latter sometimes in sexual display colours).

Thence back to Ashmore Reef (still outside the GBR), which encloses an enormous lagoon, offering decent anchorage and unlimited dive sites. Each site had something special to offer; whether mingling with a school of enormous bumphead parrotfish, munching and crapping their way along the reef, or encountering schools of the normally solitary goldspot seabream.

Clearly it was the time of year for breeding, and I managed to catch large numbers of the very common surgeon Ctenochaetus striatus darting to the surface over the shallow reef top and actually spawning. 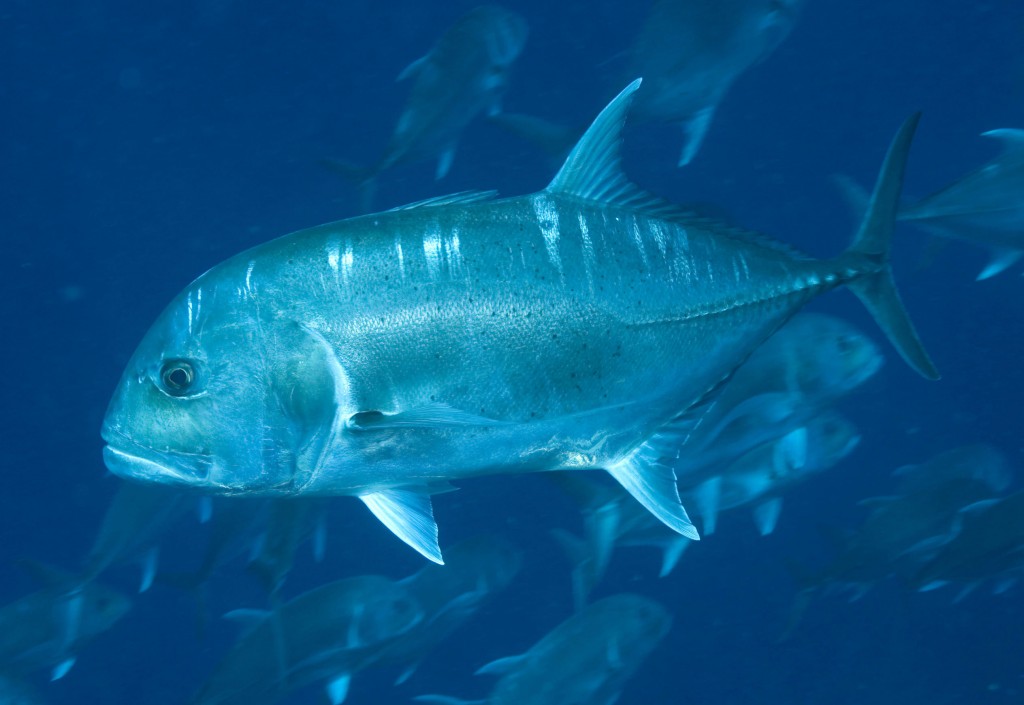 You would need weeks to survey Ashmore properly, but we needed more data from the GBR and the reefs fringing the Murray Islands, which are very close to the outer GBR. The weather was so calm at this point that on our way back we managed to briefly anchor in a surge channel on the very outer edge of the GBR, and survey a couple more sites there; something that would be feasible only a few days a year.

If anyone was to build a dive resort in the Straits, my pick for the location would be the Murray Islands. The fringing reefs are beautiful here (not obviously overfished), the water clear, and Ashmore would be a relatively short speedboat ride away… The next Lizard island, perhaps? A highlight was finding a ghost pipefish at the start of a transect, then after finishing up, finding presumably the same pipefish again… or maybe a huge nurse shark trundling past, oblivious to divers…

Next stop was what we named Maze Anchorage, further south and literally a maze of small reefs and bommies close to the outer GBR. With Eviota safely anchored for a couple of days, we took turns using the dinghy to survey at least 6 sites within a couple of kilometres. Thence south again to Seven Reefs Anchorage – one of the highlights of the trip with incredibly clear water and massive sweetlip and pelagic action over a beautiful shallow coral garden. In the sand surrounding the reef were numerous small mounds and holes made by the one-spot wormfish Gunnellichthys monostigma, a big challenge to photograph as they hover only briefly over their hole before disappearing. I would have loved more time here, but the end of this leg was beckoning, and we had time left only for surveying two sites at Dugong Island (south again) en route for Mount Adolphus Island and subsequently Thursday Island.

While bobbing around in our small and fragile craft, miles from anywhere except Facebook, it occurred to me what an achievement the whole RLS ‘thing’ is – from nowhere in 2008, to a massive list of surveyed sites around Australia and now in other countries too; producing data supporting papers published in the top scientific journals. Here is a group of dedicated volunteers achieving in a few years far more than the sum of decades of funded marine science – and on a shoestring budget. Full marks to Graham for his vision and drive in the first place, and the efforts of the RLS volunteers that continue to make it happen!