As part of a broader investigation into how marine parks are faring across the tropics, RLS volunteers Mez Larkin, Andrew Green and Graham Edgar recently headed to the ‘epicentre’ of coral reef diversity, the Raja Ampat islands of western Indonesia.
By Graham Edgar.
June 12, 2018
Share this post to:

As part of a broader investigation into how marine parks are faring across the tropics, Reef Life Survey volunteers Mez Larkin and Andrew Green joined me for underwater surveys in the Raja Ampat islands of western Indonesia. These islands are famous as the ‘epicentre’ of coral reef diversity, with record numbers of fish, mollusc and coral species recorded by scientists compared to other regions of similar size worldwide.

Our RLS transect counts were almost overwhelming, with a total of 716 fish and invertebrate species recorded in 11 days spent surveying 32 sites across the archipelago. This number was far greater than on survey trips elsewhere. We were certainly kept busy recording an average of 113 (and up to 164) fish species on the four 50-m long by 5-m wide transect blocks at each site. 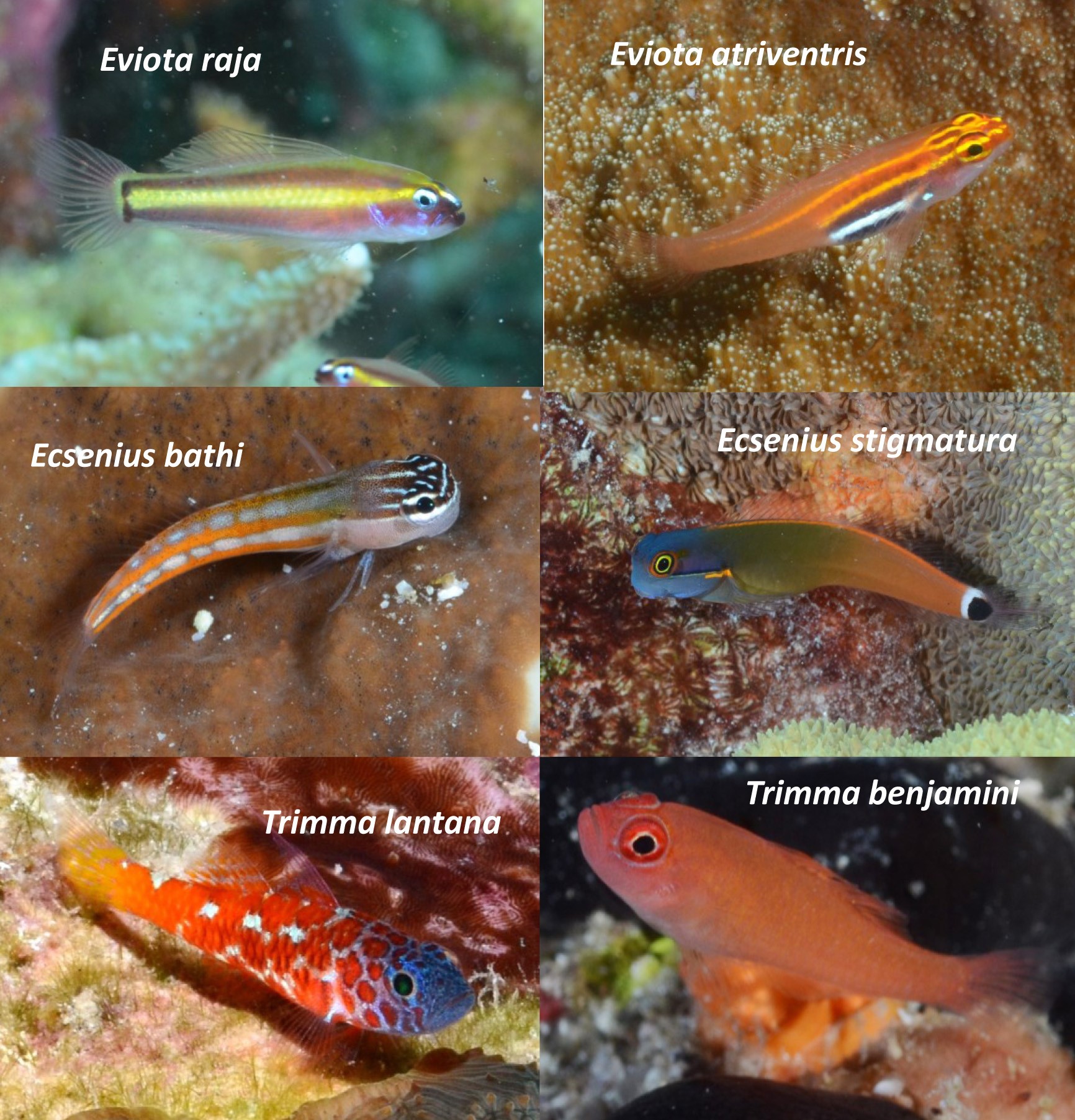 Some of the cryptic fishes seen on transects. Photos by Graham Edgar.

While the larger fishes were not much different to those seen elsewhere on reefs in the Pacific and Indian Oceans, an exceptional element of reef diversity was the number of small fishes. During RLS cryptic fish surveys, a large array of colourful gobies and blennies were sighted. Through careful scans of the seabed on the 1-m wide survey blocks, Mez and Andrew recorded up to 73 (and an average of 51) cryptic fishes and invertebrates at the different sites.

Many divers visiting the area would miss this profusion of colourful species, which included 21 species of Eviota, 12 species of Trimma, and 8 species of Ecsenius. After dives, many hours were spent through the night identifying species we had never seen before from our photos, and entering count and size data on laptops. A total of 10,553 separate species counts were made during the trip, covering 269,000 individual animals!

Another notable feature of the fish fauna was the abundance of Bumphead Parrotfish (Bolbometopon muricatum). We often saw big schools feeding or passing by, an indication that fishing pressure is low compared to other locations across the Pacific, where they are generally absent or rare. Our Raja Ampat trip was, however, a lot more than diving in a clear aquarium of tropical fishes. The above water landscape of limestone pinnacles was astonishing. Our Seven Seas Buginese prau often anchored in sheltered basins amongst mazes of craggy ridges, in one case next to an unexplored jellyfish lake. Mark, the cruise leader, and boat crew also provided a level of support that we will be lucky to encounter again.

For Mez, “It was a once in a lifetime adventure – one I’ll never forget, with wonderful staff, incredible meals (even for fussy vegetarians like myself), comfortable sleeping quarters, and loads of reference books!” For Andrew, the highlights were “the food (deliciosity and diversity); unlimited hot showers; friendly and helpful crew; and having our own dinghy so we could do our own thing”.

Seven Seas made the trip possible by generously reducing their normal rates, their efforts much appreciated by all.