It was another one of those ‘you should have been here last week’ scenarios (weather-wise), but the team dished up what can only be described as a logistical and teamwork masterclass. The target was to resurvey 16 sites first surveyed as part of the original RLS ‘Lap of Australia’ in 2010, in a very challenging and unique area to survey.
By Rick Stuart-Smith
August 31, 2021
Share this post to:

Starting with Paul’s careful planning, handy local contacts and neap tides, and finishing with enough chocolate for the last night, nothing slipped through the cracks. The shack on West Lewis Island (thanks to Dave Arthur) proved to be perfect for the task. Shelter, power, mattresses and the ‘Loo with a view’ were luxury compared to the previous camp on Enderby Island in 2010. Add the local bird and wildlife, and the unique landscape of contrasting red rocks and green spinifex, the above water scene had already made the trip. 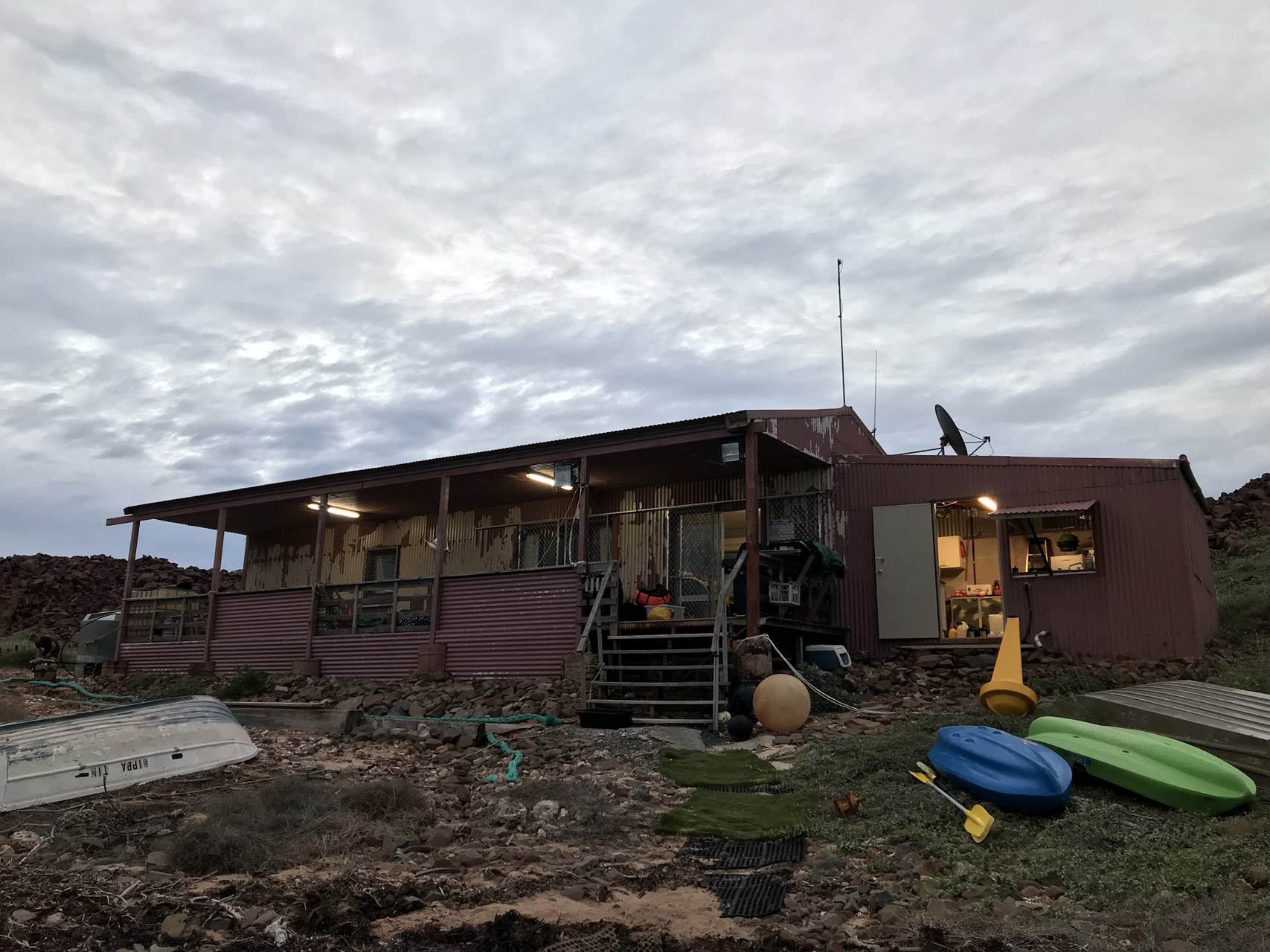 The marine life just topped it off. Although not the clear waters and clean coral reefs of Ningaloo to the south or the Rowley Shoals to the north, the interesting massive coral and macroalgal covered reefs revealed a number of species not often recorded elsewhere around Australia, like the pinkspeckled wrasse (Xenojulis margaritaceus) (which had not been recorded in >15,000 surveys of Australian reefs over 13 years), sailfin cardinalfish (Quinca mirifica) and (Chlorurus rhakoura). Interesting cryptic fishes were a regular treat like cockatoo waspfish (Ablabys taenianotus), long-snout clingfish (Diademichthys lineatus) and cockerel wrasse (Pteragogus enneacanthus). 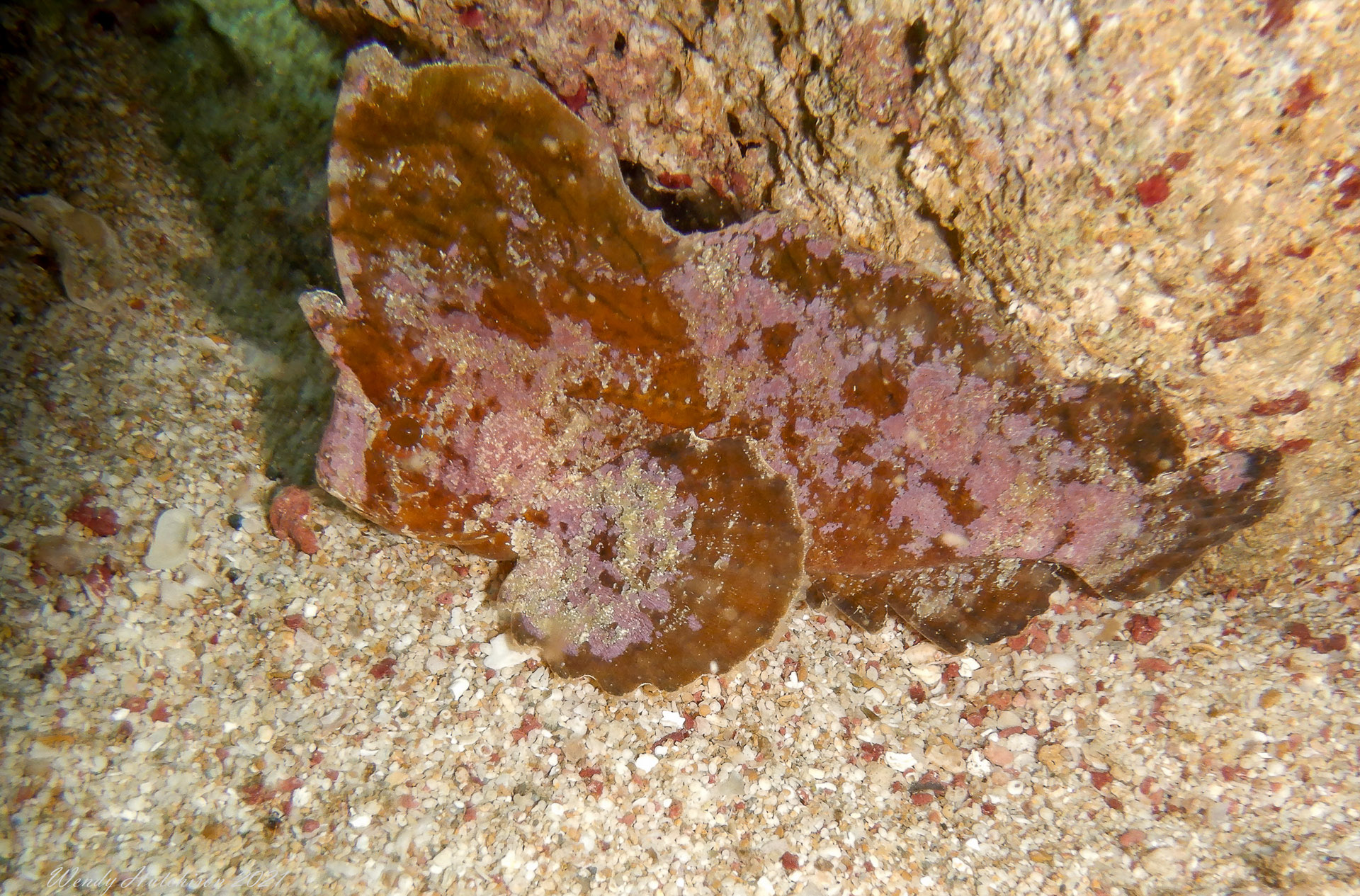 One of the interesting cryptic species we spotted, the cockatoo waspfish (Ablabys taenianotus). Image by Wendy Hutchison

Chasing down small wrasses and carefully examining images, the team also worked out that one of the most common small wrasses in the area appears to be Erdmann’s Wrasse (Halichoeres erdmanni) (only described in 2010 after the original surveys), which extends the breadth of its distribution around Australia even further. Although some RLS records need to be confirmed, H. erdmanni appears to be one of the more common wrasses on inshore reefs from Torres Strait west to Dampier, but its presence in Australia is apparently not even recognised by other major databases. A great example of the value of experienced eyes and detailed surveys in a region that no doubt has plenty more biodiversity secrets still to give up.

By the end of the mission, all 16 priority sites were surveyed plus another 160 species were recorded on M1, 107 species recorded on M2, and everyone was well fed (thanks especially to Maryann). Some more sun and less wind would have made it too good…..

Thank you to our generous funding partners, The Ian Potter Foundation and The Minderoo Foundation.