Through generous support from a Western Australia State Natural Resource Management Project grant, RLS was able to complete another successful survey trip on Ningaloo Reef.  The 2015 RLS expedition to Ningaloo started on 24th July with the team’s arrival at the Coral Bay research station on a cold and wintry night. Twelve team members (Rick, Tom, Nicola, Margo, Ben, Tim, Sophie, Kirsty, Kevin, John, Paul, and Jen) quickly familiarised themselves with the local setup, and diving commenced the next morning.

Although the weather was less than ideal, two boats managed to get out and complete a full day of surveying. A model ‘full day’ would consist of dive teams completing two transects per dive and at least two dives within the day. The second day brought a remarkable change with skies clearing and the sea settling to calm conditions, which remained for the rest of the expedition. Four members of the team (Paul, Tim, Ben, and Margo) travelled to Bundegi, where they completed three days of surveys, with the highlight being manta rays on transect at the Muiron Islands. Meanwhile the other team members stayed on in Coral Bay, sighting dugongs and sharks as they cruised to the northern areas, and were even visited by humpback whales after anchoring for a dive. 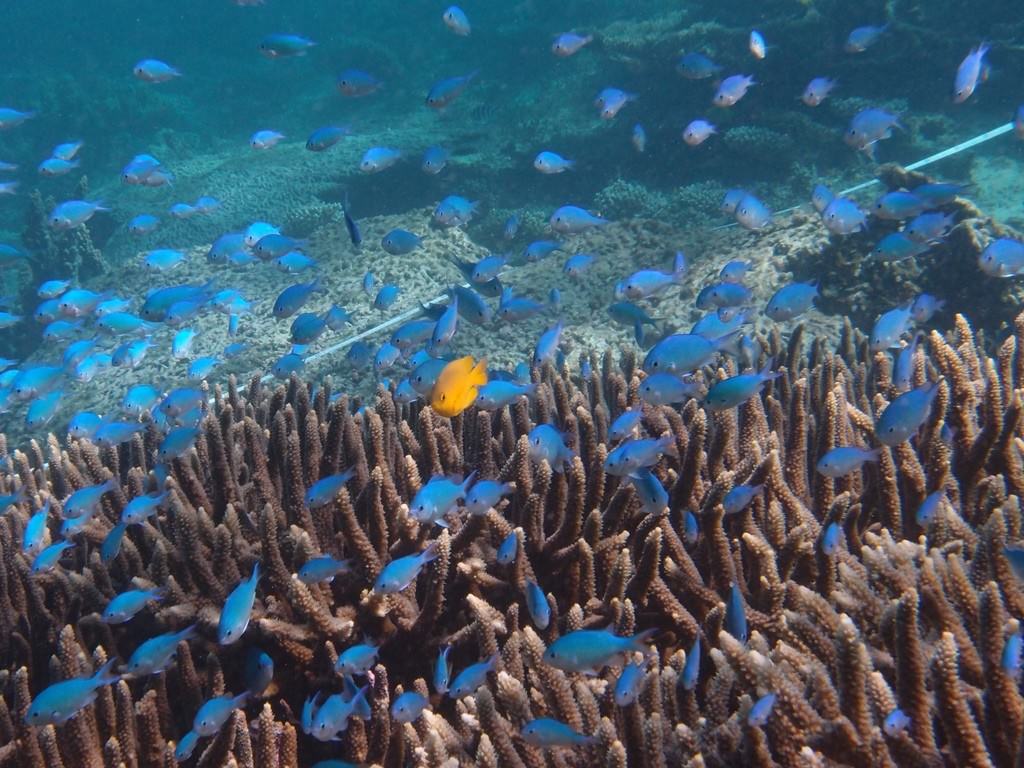 Although the Great Barrier Reef remains Australia’s iconic coral reef system, many people may not be aware of Australia’s West Coast equivalent.  Ningaloo Reef spans 260 kilometers of coastline and is a World Heritage site, owing to its significant biodiversity. RLS has surveyed Ningaloo twice before, in 2010 and 2012. During the 2012 survey trip, the team witnessed a massive outbreak of Drupella cornus, a carnivorous, coral-eating snail.

Anecdotal evidence from this year suggests snail numbers have decreased, but that may be due to potential reduction in coral cover. Unfortunately, intense storms over the last three years have not done the coral any favours. Photo-quadrat comparisons between 2012 and 2015 show survey sites, previously containing a high percentage of living coral, have been reduced to rubble. Regardless, Ningaloo did not disappoint, bringing encounters with sharks, manta rays, tropical fish, and a wide variety of invertebrates. Over 10 days of diving, 96 transects were completed at 35 sites, with 314 species of fish recorded on fish transects (method 1), and 138 species of cryptic fish and mobile invertebrates recorded on the closer searches of method 2. The whole adventure went off without a hitch, thanks to the great organisation abilities of Rick, Kevin, Paul, and Margo, the excellent facilities provided by Frazer McGregor and Mike van Keulen from Murdoch University, Ningaloo Reef Dive & Snorkel, the support from the WA State NRM Program, and the tireless work from the entire team.

Not only by observing potential biological changes along Ningaloo Reef but by systematically measuring change through RLS surveys, can we hope to identify causation of change and suitably inform ecosystem management groups. Without substantial funding and dedicated, knowledgeable volunteers, it would be impossible for Reef Life Survey to contribute to the protection of Australia’s marine heritage. If you would like to support research trips like this, please visit our donation page or contact us at enquiries@reeflifesurvey.com