Needle in a very large haystack: Searching for the critically-endangered Red Handfish

They’re 7cm long, like to hide under seaweed, don’t move much, and number fewer than a hundred adults left on the planet... Red Handfish surely are the world’s greatest hide-and-seek champions. Fortunately, a keen team of RLS & IMAS divers were up for the challenge; spending 4 days this January seeking out & recording as many of these incredibly rare fish in SE Tasmania as they could find!
By Jemina Stuart-Smith
January 28, 2020
Share this post to:

They’re 7cm long, like to hide under seaweed, don’t move much, and number fewer than a hundred adults left on the planet…. Red Handfish (Thymichthys politus) surely are the world’s greatest hide-and-seek champions.

Cue a crack team of RLS and Institute for Marine and Antarctic Studies (IMAS) divers to seek, find, and record these incredibly rare little fish in south-eastern Tasmania.

The work consisted of re-surveying several RLS sites, a full census of the two known populations of Red Handfish and searching for Ziebell’s Handfish on the Tasman Peninsula. 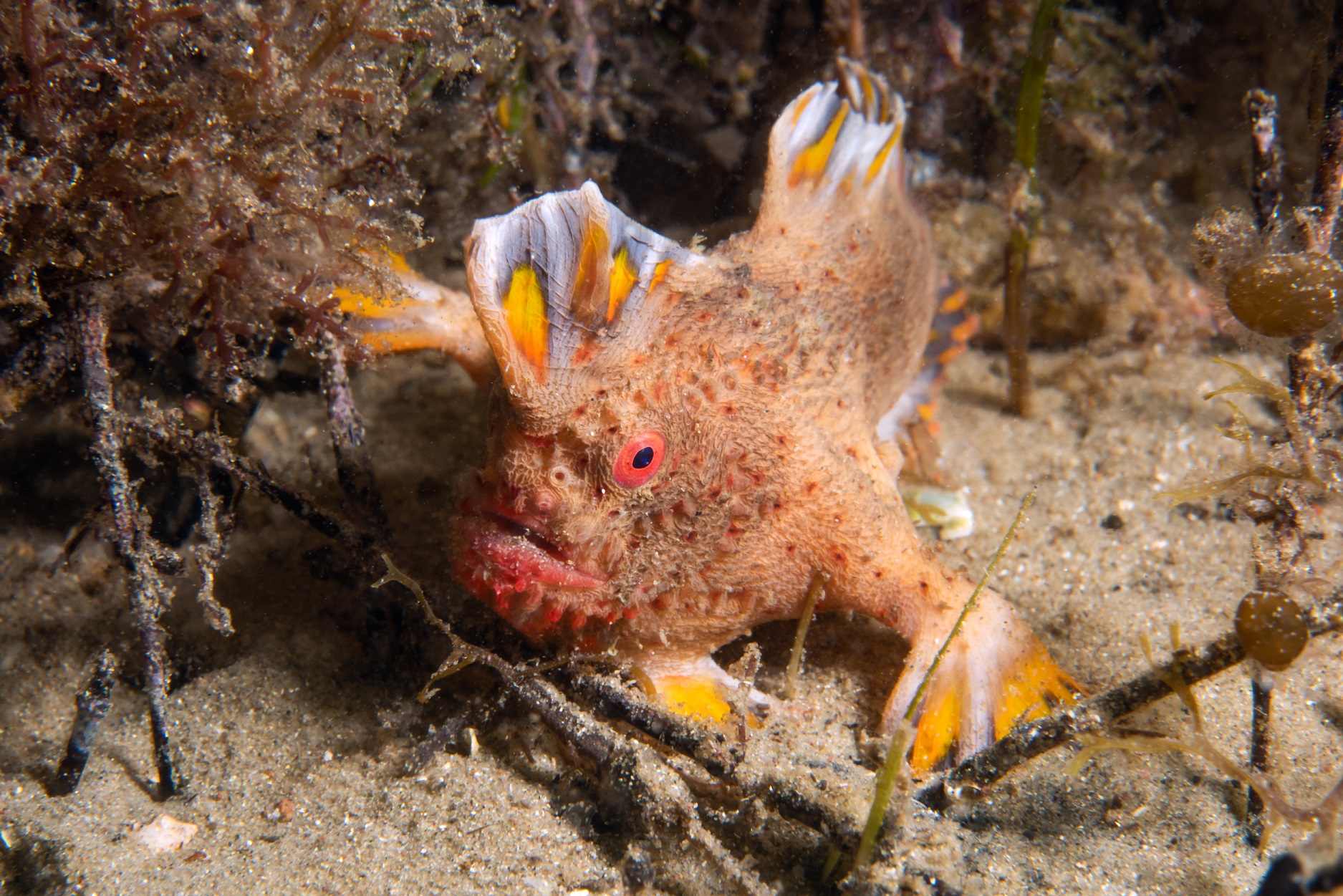 The Red Handfish census work forms part of Tyson Bessell’s PhD project through IMAS at the University of Tasmania (more info here). Tyson’s work will provide the world’s first population estimate of the species, as well as gathering information on movement, growth and habitat preference (using unique markings to be able to identify individuals). The images collected will also be used in a NESP Marine Biodiversity Hub project using morphometrics (body measurements) to look for any size/proportion differences between males and females (which we are currently unable to tell apart).

The Handfish week started off with comprehensive surveys at the Red Handfish site at Primrose Sands - two RLS transects, and countless handfish belt-transects covering the entire habitable area. The team were excited about the unknown – no comprehensive census of this site had ever been done before, and population estimates had hoped to be between 20-40 individuals for this small site. The excitement of finding the first few handfish was later dashed, with a total count of just 7 individuals for the entire site. RLS diver John Turnbull found 4 of those – and later also found another rarely seen red fish, Gnathanacanthus goetzeei (Red Velvetfish). 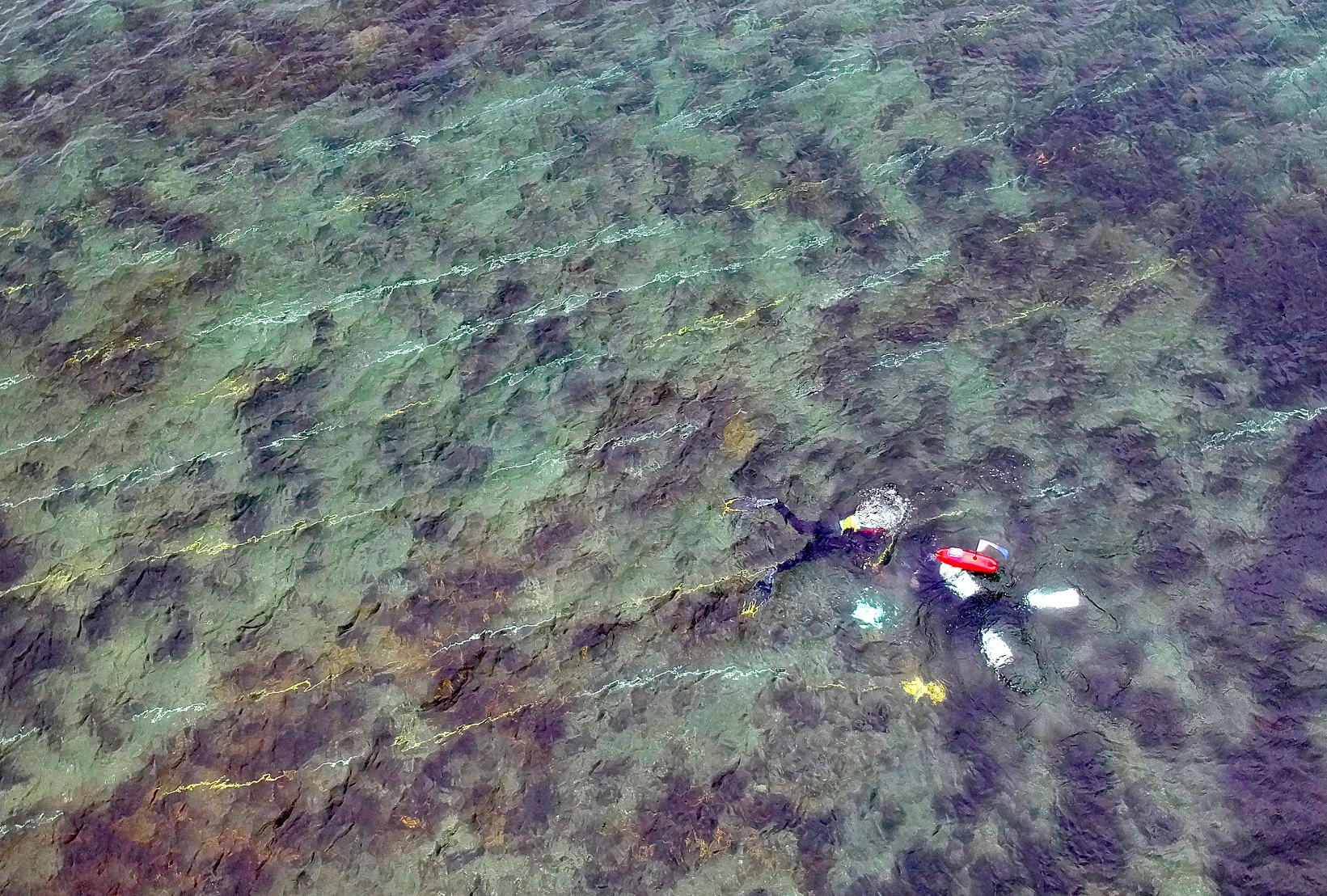 Divers "process" a Red Handfish on one of dozens of belt transects searched with a fine tooth comb by RLS & IMAS divers. Photo by John Turnbull.

The second (larger) site was surveyed over the following 3 days, again using belt transects to cover the area in the search for Red Handfish – 45 individuals were found. In time, Tyson’s work will be able to tell us how many were recaptures from previous surveys.

Half of the team also surveyed sites on the Tasman Peninsula with the team from Eaglehawk Dive Centre to continue the search for Ziebell’s handfish (Brachiopsilus ziebelli), for which no confirmed sightings have been made since 2007. Despite two beautiful dives in suitable handfish habitat at The Cathedral Cave and Sisters, none were seen on this trip.

Other notable records on RLS transects were Real Bastard Trumpeter (Mendosoma lineatum) and Striped Trumpeter (Latris lineata) – the latter usually found on deeper reefs and a first for the RLS database.

A huge thanks to all those involved – not just the huge team of dedicated divers, but those helping organise or providing support in some form!