…advice from a Northern Territory’s Fisheries officer and ex-barra fisherman I ran into at Darwin airport, en route to Groote Eylandt to join the Gulf of Carpentaria leg on Eviota. He was of course referring to surveying in croc country, since, as he helpfully added, they track you (before getting intimate). The RLS team had survived the crocs on the previous leg across the top from Darwin, having met the same chap the week before; but in surveying seamounts in the Gulf, we checked out a few inshore reefs at Groote and elsewhere, where it was ‘one eye over your shoulder’, so to speak. The closest we came to a croc underwater was a scaly flipper in the gloom of a cave in low viz, which proved to belong to a sleeping turtle! Surveying seamounts was our priority, as funded by the Commonwealth, since they are mostly in Commonwealth waters and some are in recently gazetted marine reserves.

From Groote, the crew, consisting of Carly Gioso, Joe Shields, Graham Edgar and myself, headed south towards the Vanderlins, to a shoal we subsequently named Groper Shoal. We didn’t know it at the time, but this dive proved to be one of the highlights of the next month’s voyage, due to the giant Queensland gropers recorded on transect, and their approachability; coupled with very clear water.

Unfortunately, this shoal was not in a reserve… so we couldn’t linger; but perhaps the SW corner of the Gulf deserves some more attention next year. 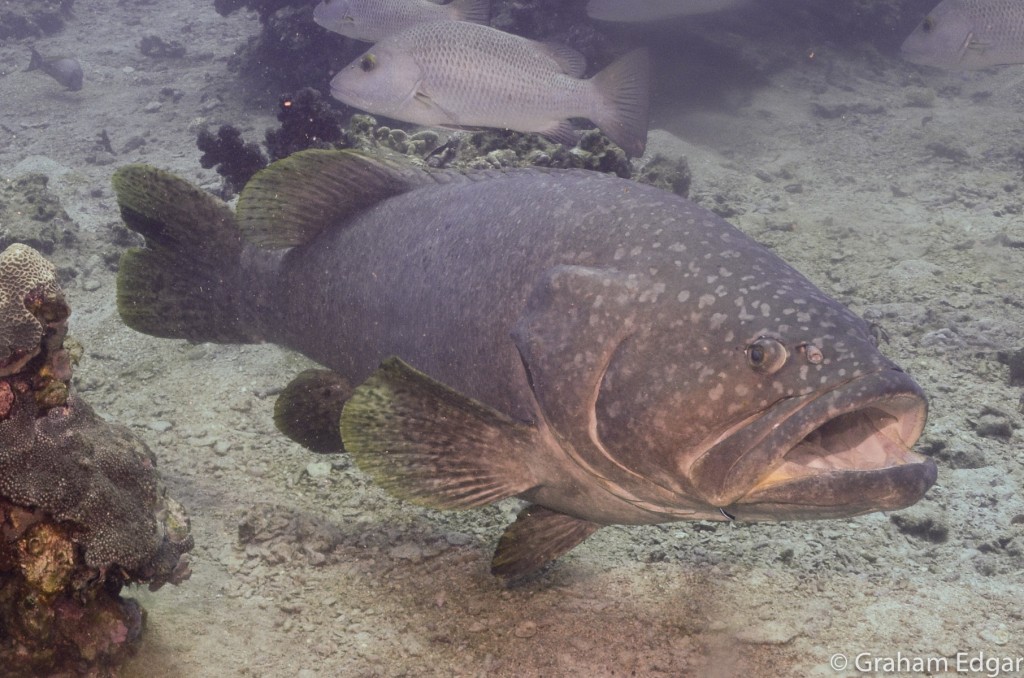 The next shoals we checked out were near Mornington Island in the SE Gulf; which we named Chinaman Reef (after the numerous huge Chinaman fish) and Foggy Bottom (where lovely clear water for the first 15m or so suddenly gave way to a colder layer of murk for the last few metres, with much reduced viz).

Typically pelagics (mainly carangids) and a few grey reef sharks were found in the clearer surface water; with the bottom featuring schools of some of your common emperors, jacks and sweetlips, but at the maximum sizes you normally only read about in the fish books.

Think slatey bream to 90cm, mangrove jacks in large schools to 80cm and so on. In the background, the normally shy Malabar groupers often following us like oversized puppy dogs. Surely a sign of very light (if any) fishing; definitely not the case with the northern Gulf shoals where all these delightful monsters were absent. In fact while visiting Weipa briefly we were told ex-prawn trawlers now target mangrove jacks on an unmarked shoal named 40 Mile Reef off Weipa. After a diversion resurveying two Mornington Island sites first surveyed by Rick from a land-based small boat in 2010, we had considerable trouble finding more diveable shoals until we got near to the Torres Straits.

The problems were either the charted depths for the marked shoals were inaccurate (actual positions too deep); and/or currents making surveying unsafe; and sometimes a lack of visibility. Nevertheless we managed to survey the well-marked Carpentaria and Merkara Shoals, as well as Booby Island and two other un-named shoals. All these northern sites featured relatively low fish species diversity and a general absence of larger predators; perhaps because they are in easy reach of fishing boats operating in the Straits. For those interested in the diving and living conditions, the water was generally around 27-29 degrees, and the weather excruciatingly hot; with long passages between dive sites necessitating rotating 3 hour watches, cabins stifling with hatches closed (to prevent splashes on to the bunks beneath), and exceedingly trying data entry conditions! (And let’s be honest, some awesome fresh-caught Spanish mackerel and northern bluefin tuna meals…!).