Twenty meter visibility, Yellow-headed hulafish in the tens of thousands and a rare Western Blue Devil (Paraplesiops sinclairi) are but a few of the delights encountered by a team of RLS divers on a trip to survey the Geographe Marine Park earlier this month.
By Paul Day
April 07, 2019
Share this post to:

The weather forecast (the one topic of conversation that is talked about on every single RLS trip, worldwide) was looking good for the last weekend of March and the WA team were ready and keen to go. Our sites in Geographe Bay are in 18 m of water and the prevailing conditions this time of year can produce visibility of 20 m or more.

The conditions were perfect for our dives and we could see bottom from the surface.

Our plan was to survey 4 sites that were also completed in March 2017 (one of which was established in 2009), 2 sites inside and 2 outside the zone.

We decided on a late start for the first day with a moderate wind forecast to drop out by mid-morning and glass off around midday. We launched the RLS “Red Duck” and the very capable (and very last minute addition) 5 m polycraft hired from Freedom West boat hire in Busselton and cruised to our first site, Squiggly Reef.

With a bigger team than the previous surveys, we were able to add an additional transect to the sites and after pouring over the habitat maps the night before, the team pinpointed areas of interest to lay out the extra transects over interesting ground. Squiggly Reef did not disappoint with 50 m of coral cover dominated by Turbinaria home to a number of the Two Spot Fringe-finned Goby, Eviota bimaculata. The team also recorded Baldchin groper (Choerodon rubescens), Breaksea cod (Epinephelides armatus), west Australian Dhufish (Glaucosoma hebraicum) and Queen snapper (Nemadactylus valenciennesi). 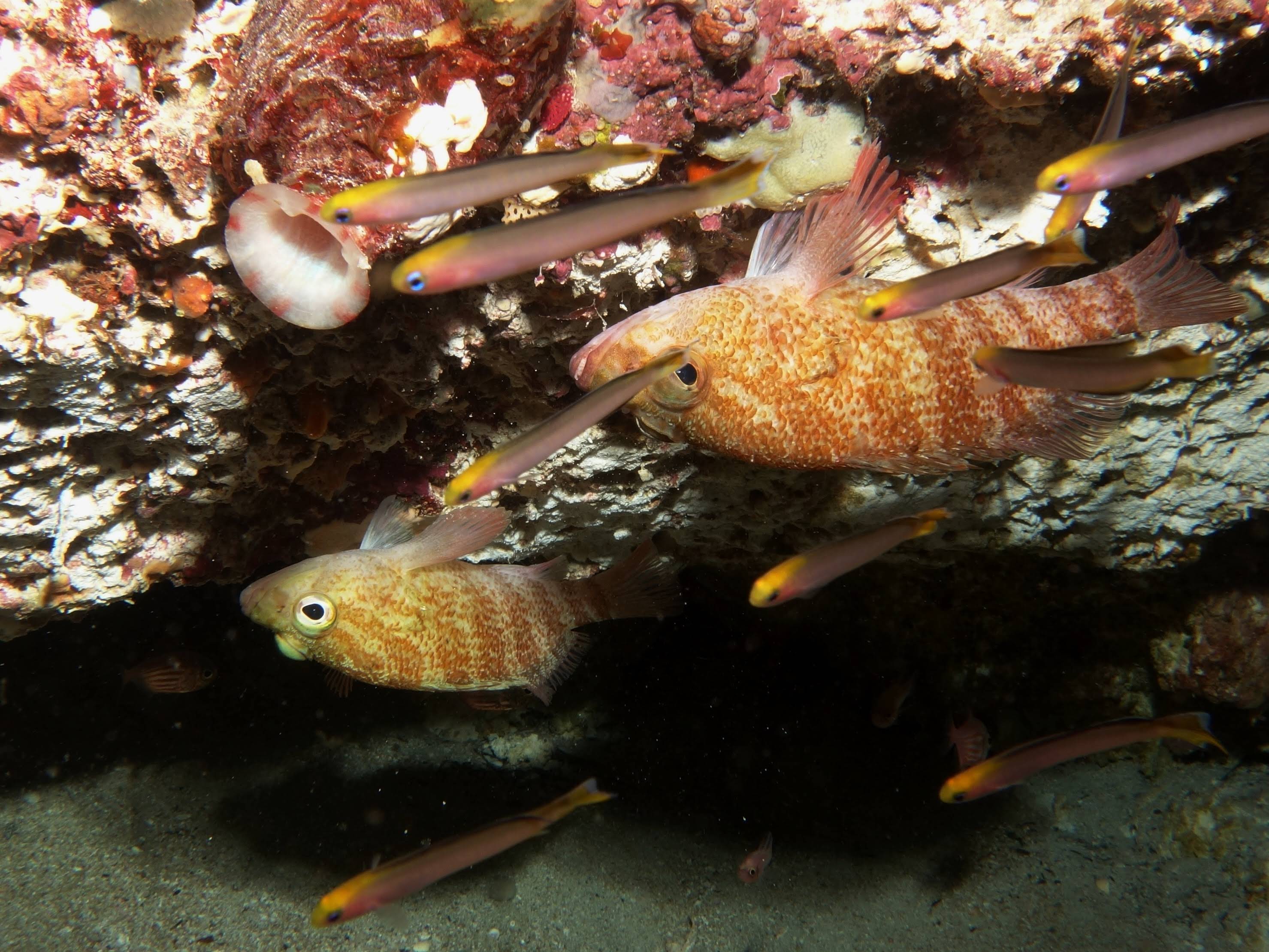 Our second site, Coral Gardens 2 is the original RLS site set up in 2009 and repeated in 2017. The team encountered the iconic Western blue groper (Achoerodus gouldii), Harlequin fish (Othos dentex) and the mighty Samsonfish (Seriola hippos).

A later than usual return to the boat ramp was met with a “no problem, we will wait for you so you can dive early tomorrow” from the super accommodating Polly at Dive Shed. So we retrieved, secured the boats and headed to the shop to pick up replacement tanks.

That night the team settled into the accommodation organised by RLS diver Wendy Hutchinson to enter data and sort photos. The house sits on a large block with plenty of room for the boats and vehicles. A large lock up shed containing dive gear drying racks and a double sink for rinsing cameras completes the setup. The following day we launched early with a gentle breeze from the east that dropped out midmorning.

Hippo creek was our first stop. West Australian Dhufish and Breaksea cod were recorded at a depth of 18 m but the divers returned to the surface excited to have recorded the rarer Paraplesiops sinclairi (Western Blue Devil), Yellowspotted Boarfish (Paristiopterus gallipavo) and the Spotty seaperch (Hypoplectrodes wilsoni).

Devil’s Lair, our final site, was true to its name with the team recording 11 Southern Blue Devils (Paraplesiops meleagris) across two transects.

The diving on Four Mile Reef is surprisingly good considering the ground is mostly flat with patchy seagrass meadows and sand surrounding a relatively narrow band of reef that forms a 2-3 m drop off along its length. The coral garden at Squiggly Reef is impressive, the abundance of schooling species such as Rough bullseye (Pempheris klunzingeri) is in the thousands and Yellow-headed hulafish (Trachinops noarlungae) in the tens of thousands. Rare and cryptic species can be sighted and iconic species are common.

A huge thank you to Polly and Alecia Macdonald from Dive Shed in Busselton, Chris Lane from Freedom West boat hire for supporting RLS and our volunteers for their skill and enthusiasm.