The RLS team got together for some local surveys in the Derwent Estuary in Hobart from November 13-15 – with Sue Wragge’s boat ‘Underwater
Adventures’. Trained RLS volunteers Sue Wragge and Michael Jacques joined in and some new volunteers, including Amelia ‘photo-quadrat guru’ Fowles, Jane Elek, Tim ‘done a million invert surveys during my PhD’ Alexander and David Sinn got to show their stuff. We had near perfect conditions for the first day’s diving – glassy calm, 30 degree air temperature, and 8m viz (see pic).

Throughout the trip, we surveyed a range of noticeably impacted and relatively natural reefs on both sides of the estuary, including sites at Manning Reef, Ralph’s Bay and also in the proposed extension to the Tinderbox Marine Reserve. Sites varied from rubbly reef with no macroalgae in Ralphs Bay to Eckloniadominated sites near Tinderbox. 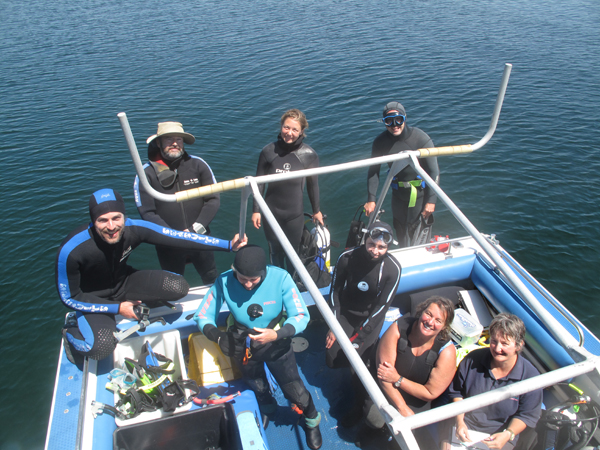 Overall, we recorded 30 species of fish and over 60 macroinvertebrate and cryptic fish species. The marine life encountered clearly reflected the variation between sites in the apparent state of the reefs. Near tinderbox, at a relatively natural kelp-dominated site, Amelia recorded a rare Red Velvet fish (Gnathanacanthus goetzii) – but on the other hand, the most commonly recorded fish species at all of more impacted, eastern shore sites were the introduced threefins –Forsterygium varium and Grahamina gymnota. The native
threefin, Trinorfolkia clarkei (pic), was relatively sparse compared to these two introduced species. Introduced sea stars (Asterias amurensis), screw shells (Maoricolpus roseus) and crabs (Metacarcinus novaezelandiae) were also relatively common at more impacted sites.

Thanks again to Sue for taking us out on her boat which is perfect for diving off, and a big thanks to all those who contributed and will hopefully be helping us contribute a big survey effort around Hobart over summer and in the future.